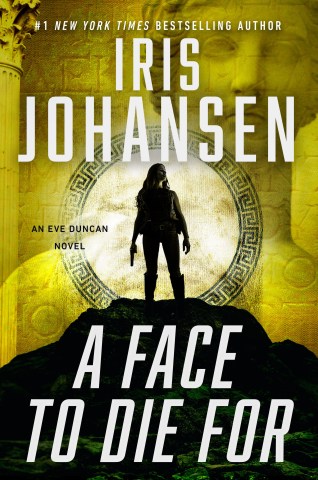 A FACE TO DIE FOR

Eve Duncan attempts to unearth one of history’s mostintriguing lost secrets in this adventure ripped from the pages of Greek mythology, by #1 New York Times bestselling author Iris Johansen.

The sun was going down!
And she was late again.
There was no way Riley was going to be able to get back to the camp before her mother and father returned from the trip to the village.

But she had to try.

She skidded down the bank that led from the creek. Then she was deep in the jungle and heading toward the hills in the distance. The night creatures had not come out yet, but the stillness told her they were there waiting in the shadows for their turn. She had caught sight of a panther earlier this morning...This time of day always excited her, and she instinctively slowed down to let the sensations flow over her, the fear, the eagerness, the curiosity. But then she reluctantly speeded up again. She had to be more careful after that last warning from her mother. She was running at top speed through the jungle now. She jumped over another creek and could see the camp a short distance ahead. She didn’t hear any sounds of cooking or conversation, but that didn’t mean Riley would get away with disobedience. It was fully dark now, and her mother didn’t like the night creatures the way Riley did. She always insisted that her father be back at camp before the end of the day.

Well, she could only hope that something had delayed the purchase of the artifact at the village. She ran around to her own tent that was in the rear of the encampment. She lifted up the back of the tent and rolled underneath the edge.

A beam of light speared her face in the darkness.

“You were told to stay in the tent, Riley,” her mother said coldly.

Her mother lit the lantern on the table beside the bed and then gazed at her disapprovingly. “Not only disobedient, but you look like a filthy ragamuffin. I saw children in that village today who looked much cleaner than you.”

“I’m not filthy. I took a bath in a creek right before I came home.” Riley was careful not to mention that the creek had run through an underground cave and ended in a ten-foot waterfall. Her mother would not have understood. “And I finished the lessons you gave me before I took a walk. I didn’t think you’d mind. You always say I should get exercise.”

“You crept past the guard again. You know you’re not supposed to go anywhere alone. You’re eight years old. What if you got lost? Your father would blame me.”

“I never get lost.” She sat up. “I’m like Eleni. Remember all the stories you told me about her? She never got lost and she never got tired. She was a true warrior.”

“You’re not like Eleni,” her mother said between gritted teeth. “You’re just a disobedient child who causes me endless problems. And I’m sorry I ever told you about her.”

“I’m not.” Riley knew she should just be quiet and not argue, but she couldn’t accept those words. She lifted her chin. “I remember every one of those stories. Maybe I’m not like her, but I try to be.”

“You’re impossible.” Her mother shook her head. “Now clean up and then go to bed. And if you’ve lied to me and didn’t finish those lessons, you’ll hear from your father. I’ve told him that we should send you to a private school in Egypt. I shouldn’t have to handle you by myself.”

“I didn’t lie to you. I even did an extra lesson before I left for my walk. That should please him.” She changed the subject. “Did you get the artifact?”

“We got it,” she said curtly. “But it was hardly worth the trip. It was far too primitive and led us nowhere that we wanted to go.” She turned to leave. “I suppose he’ll want to know if you’ve had anything to eat.”

“Good. Then go to bed. I don’t want to hear anything else from you for the rest of the night. Your father and I have work to do.” She left the tent.

Yes. Riley jumped to her feet and ran over to the table and hurriedly washed up and brushed her hair. Then she was in her pajamas, turning off the lamp, and crawling into her sleeping bag.

She closed her eyes. Sleep. Forget everything her mother had said. Remember the jungle, the strange sound of the chimps high in the trees, the way her heart had pounded as she’d run down the path this morning after she’d left the encampment. Let everything else go so the dreams could come.

“You got in trouble again.” Riley heard Eleni laughing even before she saw her sitting on the stool beside the arched windows of the palace. She was dressed in a white tunic; her blue eyes were lit with amusement and her golden hair was short and shimmering around that wonderful face. “Won’t you ever learn, Riley?”

“That’s what I’m trying to do.” She didn’t care if Eleni was laughing at her. There was only humor and mischief and no hint of scorn or bitterness when Eleni came to her. “You kept bragging how fast you were, how none of the young boys of the city could beat you. But I had no one to teach me. I just had to do it on my own. I was very fast today.”

“Not as fast as me. Probably because they don’t let you run naked as I do sometimes.” Eleni tilted her head. “But you did well, and I was proud of you.” She was suddenly chuckling again. “And I’ll be more proud if you don’t make mistakes and cause your mother to be angry with you. I’ve warned you about that. Running a race is one thing, but handling the people who can hurt you is more important.” Her smile faded. “And your mother does hurt you.”

Riley couldn’t deny that. “Sometimes. She said she was sorry that she’d ever told me about you.” Riley frowned. “I had to tell her that—” “No, you didn’t,” Eleni interrupted. “Because she did tell you about me, and that means you win no matter what she thinks now.

When you close your eyes, I’ll always be with you.”
“She thinks you’re only a dream.” Riley scowled. “She laughed at me.”

“A dream?” Eleni nodded. “She could be right. But what does it matter? I’m here and you’re here and together we’re strong enough to shape the world to suit ourselves. Would you like that?”

She shrugged. “I can’t stay the same all the time. We all change, Riley. Sometimes life changes us. I just found out that I have to choose a husband and I’m not certain that pleases me.”

She chuckled. “But what if I miss something interesting if I don’t? I’ve never been afraid of taking a chance. You mustn’t be, either.” She leaned back on her stool. “But we won’t talk about it now. Perhaps I’ll tell you how it worked out the next time we’re together. Or perhaps not, maybe I’ll have wonderful secrets that I won’t want to share.”

“You’ll tell me,” Riley said flatly. “How can we shape the world to suit ourselves if you keep secrets from me?”

“True.” Eleni was grinning again. “But for now you have to tell me your secrets. Start at the beginning of your day and tell me everything. How fast did you run? Did you see any new, wonderful creatures? What about your endurance? I’ve told you that’s just as important. Share with me, Riley.” Her smile was luminous as she coaxed, “And I promise I’ll always share with you . . .”

Eve Duncan attempts to unearth one of history’s most intriguing lost secrets in this adventure ripped from the pages of Greek mythology, by #1 New York Times bestselling author Iris Johansen.

Archaeologist Riley Smith has been obsessed with Helen of Troy since she was a small girl, trailing her professor father all over the world in search of the tomb of the world’s most beautiful woman. Professor Smith put his life on the line to prove that, instead of a myth, Helen had been a living, breathing queen.

Riley seeks the help of forensic sculptor Eve Duncan, who has the unusual skills necessary to recreate the face that launched a thousand ships—revealing Helen’s true appearance for the first time in history. But convincing Eve to take on the challenge will be difficult because her efforts could come at great personal risk to her and her family…

Tomb raiders have murdered Riley’s father, and now she is more determined than ever to reach the burial site first, avenge his death, and enlist Eve’s aid. Also on hand to help is dashing fixer and treasure hunter Michael Cade, but could he have his own secret agenda when it comes to finding Helen?

Now both Riley and Eve are in danger and in a race across one of the most remote parts of the world. All they have is their trust in each other and their belief in a dream as they hunt for Helen.

Iris Johansen is the #1 New York Times bestselling author of more than fifty consecutive bestsellers. Her series featuring forensic sculptor Eve Duncan has sold over twenty million copies and counting and was the subject of the acclaimed Lifetime movie The Killing Game. Along with her son, Roy, Iris has also co-authored the New York Times bestselling series featuring investigator Kendra Michaels. Johansen lives near Atlanta, Georgia.

Roy Johansen began his professional writing career with his original screenplay for "Murder 101," for which he won the national FOCUS award, sponsored by Steven Spielberg, George Lucas, and Martin Scorsese. The movie stars Pierce Brosnan, and the script won the Edgar Allen Poe award from the Mystery Writers of America in the Best Television Miniseries or Movie category.

Johansen has also collaborated with comic book legend Stan Lee in creating The Accuser superhero character and has written screenplays for Warner Bros., Universal Pictures, Disney, and MGM. His novels include The Answer Man, Beyond Belief, and Deadly Visions in addition to nine works co-authored with Iris Johansen.